SYNERGIA emulates the dki Synergy synthesizer as a VST3/AU plugin. The original Synergy was released in 1982 as one of the first commercial digital synthesizers, featuring additive and FM synthesis in its core. It appears on several Wendy Carlos' works, including the Tron soundtrack and the classic Beauty in the Beast album, as well as on Donald Fagen's first solo album Nightfly. Synergy is based on earlier Crumar GDS and Bell Labs Alles Machine designs.

The plugin attempts to reproduce Synergy's sound as accurately as possible. It runs the original eprom binary in an emulated z80 environment, and models the discrete oscillator board in integer arithmetic. Other subsystems such as the front panel, keyboard, sequencer, cartridge, midi and external control ports are modeled as well. Analog board antialiasing filter's linear properties are approximated, but nonlinearities of the DAC, filter and amp sections are yet to be implemented. The plugin has experimental support for Wendy Carlos' custom microtonal Synergy build.

The spectrograms of a simple dynamic two-operator FM stack below compare a hardware Synergy (top) vs. emulation (bottom). Original spectrograms by Ross Totino, cropped to mono for easier observation.

The downloaded zip file contains a Mac or Windows installer for standalone, vst3 and au plugins. Unzip and double-click the pkg (Mac) or exe (Windows) file to launch the installer wizard. The binaries are unsigned, so OSX Catalina users might need an additional step as explained in this brief video.

Synergia runs the original Synergy ROM images (v3.21 and v3.22 are supported). Since the status of the ROM copyright is unknown, the ROMs need to be downloaded and installed separately. v3.22 ROMs can be downloaded from groups.io Synergy community pages. Access requires signing up for a free account. Once logged in:

Important: on Windows it is strongly recommended that the ROMs are installed before the plugin is first launched. Failing to do so may crash the DAW host! Having to download and install the ROMs separately is definitely inconvenient, but luckily it needs to be done only once.

The groups.io community site also hosts a collection of Synergy cartridges, so while still logged in, maybe download those as well. Cartridge CRT files are contained in Files/SynergyVoiceLibrary.zip.

One or more CRT fies may be dropped onto the plugin gui to make them appear in the BANK combobox. Mac version also accepts a folder of CRT files. When dropped, all CRT files contained in the folder become available in the current session, as well as in future launches of the plugin. On Windows, the related cartridges folder is located inside the Synergia folder that appears on the desktop after installation.

Presets may also be prepared using the Synergize patch editor/librarian.

The operation of the plugin follows the hardware Synergy as explained in the original owner's manual. Plugin specific details are described briefly below. Note: missing pages from section 13-5 onwards can be found in the older manual version.

Synergia's front panel controls mimic their hardware counterparts. In short: an active switch is indicated with a lit red led. Some switches have multiple states, which are indicated with a slow/fast blinking led. Most knobs also have a led, which is lit when the knob is in tracking, i.e., active mode. To activate a knob, turn it all the way to left, and then right until the led above it becomes lit.

The two top left buttons tab between PERFORMANCE and EFFECTS views of the upper panel. The ACTIVATE FX toggle activates (green) or bypasses (as shown above) the effects section. The SCALE combobox activates an alternative tuning system, or resets it back to the factory default equal temperament with option "synergy". FLAT | WOOD toggles between the two provided skins.

The oscillator board is monophonic, but capable of spreading individual notes to left, right, or both channels. Synergia's effects section is stereophonic. The two leftmost knobs are used to set channel specific volume levels. The LINK toggle - once activated as green - moves both knobs in tandem. The rest of the controls work as detailed in the Synergy user manual. Pitch bend and modulation section is currently disabled. Bend and modulation work via midi though.

The Effects are cascaded in series from left to right. Each effect may be activated individually by clicking on its caption (green indicates active state). Note that the top row ACTIVATE FX toggle needs to be on as well.

EQ has three identically parametrized biquad bands. The symbols at the top of each band select highpass, peaking/notch and lowpass modes. the band is in bypass mode if none of the mode symbols is selected. Freq and Q knobs adjust cutoff/center frequencies and resonance/bandwith of the biquad, respectively. Gain is available only in peaking/notch mode: center position denotes no gain, positions to the left control notch depth, and positions to the right adjust peak height.

AUTOPAN pans the signal in stereo space. it is driven by a triangle or square shaped LFO. Depth controls stereo width of panning, while Rate sets the LFO speed.

SPREAD thickens the sound by mixing in slightly Detuned phantom oscillators. Amount controls the level of the phantoms, and expands the spatial image of the mix. Middle position gives full stereo spread, while higher values work as a "dimension expander".

DELAY provides separate controls for each channel (L or R), or links the controls together when LR is active. Mix controls the dry/wet ratio, and Time sets the delay amount. The center position of Feedback knob denotes zero feedback. positions to the left control cross-channel feedback level, and positions to the right do the same for straight feedback effect.

The BANK/VOICE section at the right side manages the presets. the upper combobox switches banks by activating the internal sound rom (INTERNAL.ROM) or one of the CRT format cartridge files. Initially, only INTERNAL.ROM/CRT are available. More CRT format files may be added by drag'n'dropping them onto the interface, as described in the Quick Start section above. The lower combobox selects one of the 24 available presets in the active bank. It duplicates the functionality of the VOICE switches.

The Cartridge switch toggles between internal and cartridge banks, and is linked with the state of the upper combobox. The VRAM switch activates yet another bank which is managed by the external control software. Once activated, Synergia appears as a target device in the Synergize patch editor/librarian, which can then be used to manage the VRAM bank, and edit the presets in more detail.

The remaining sections in the lower panel work as in hardware Synergy, and are detailed in the user manual.

The plugin emulates the z80 cpu at the original clock frequency, which requires a fairly large buffer size. I've been happy with 512 samples @ 48kHz, but if you are experiencing glitches, extending the buffer size further should help. I'm exploring various optimization options to hopefully lower the buffer size requirement in a future version.

Microtonal support is still experimental. The small keyboard icon at left side of the SCALE combobox activates scale root mode, in which the lowest full octave of the soft keyboard selects the scale root tone (Synergy's scales are limited to 12 notes). in scale root mode each root note scale may be detuned separately using the master tune knob. scl and kbm files may be dropped on top of the GUI, or they may be copied directly into Synergy's scales folder.

I've not yet analyzed Synergy's aliasing footprint. Based on Kevin Doren's original filter plots i'm currently using a linear-phase antialiasing filter with the response shown below. The filter starts a steep roll off after 12kHz, and goes a bit deeper than what was presented in Kevin's plots. Nonlinearities remain unmodelled. 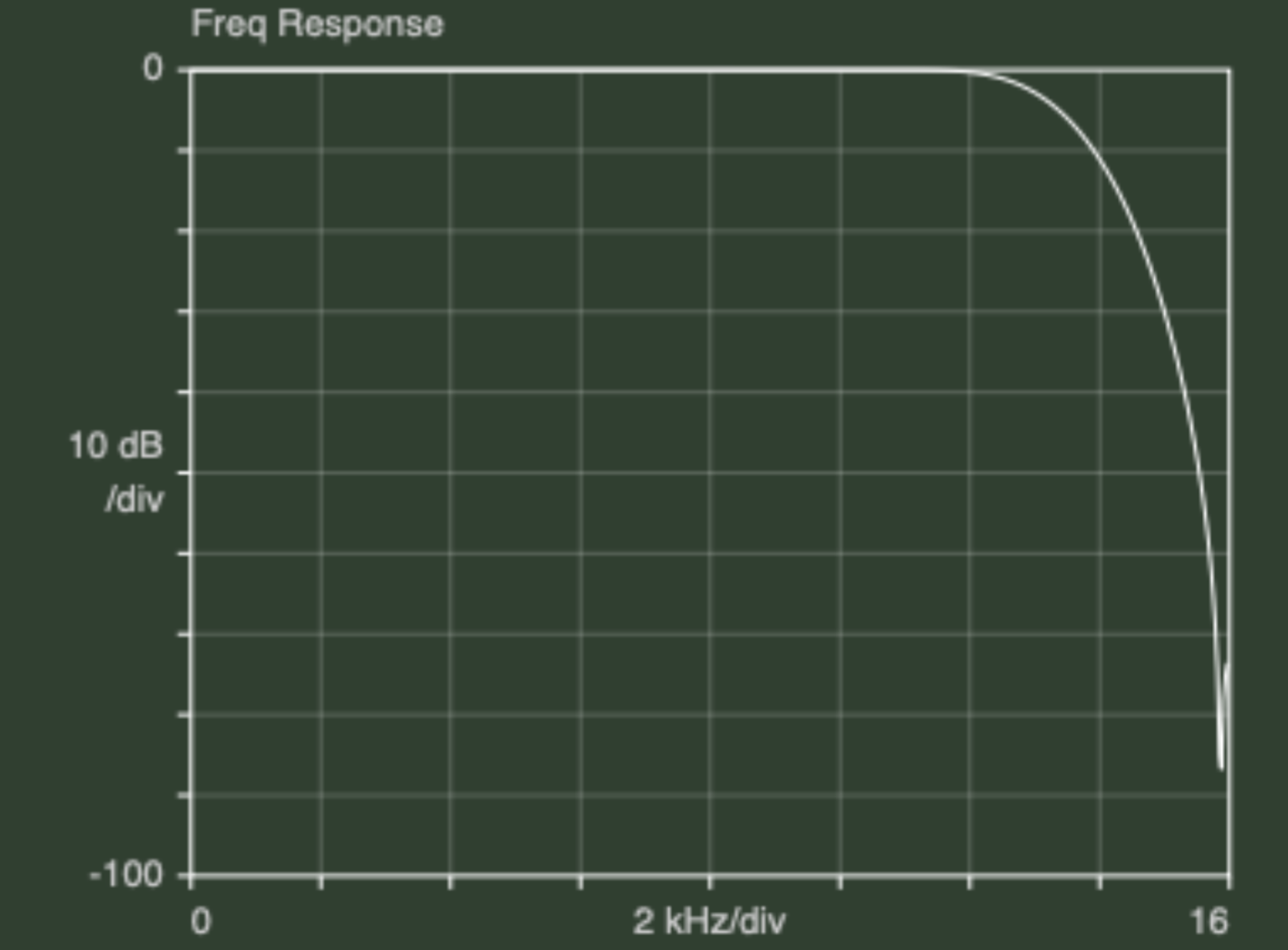 Please email any issues, feedback and ideas to jariseon -at- yahoo.com, or join the #synergia channel in synergize slack group. To join the group, just send an email to "support -at- chinenual.com" to get an invite from Steve. If you have a github account, it is also possible to raise an issue directly here.